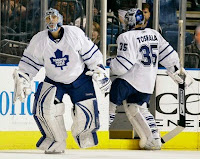 Tonight Vesa Toskala let in three goals in a span of 3:14. Shortly after a shorthanded shot handcuffed him deep in his net to give the Islanders their three goal lead, Toskala went to the trainer's room and did not return.

After the game, it was revealed that Toskala had tweaked his (chronically injured) groin after the second goal. Knowing this sours the outcome of the game a little bit. Toskala was just trying to be a good soldier, battle on through his injuries to give his team a chance to win. However he let in a decisive goal while doing so.

This isn't the first time this has happened. Earlier this season on Oct 12, down 3-2 to the Rangers in the second period, Jason Blake shoved Chris Drury into Toskala, aggravating his groin. After the intermission, Toskala remained in net and surrendered 2 goals in 3:13 to start the period, going on to lose 7-2. Toskala would not play another game until the 31st, 19 days later, even though he played for over 20 minutes after his injury.

Last season at the trade deadline the Leafs revealed that they had picked up Martin Gerber off of waivers and that Toskala would miss the rest of the season for groin surgery. The impetus for the move had been Burke calling Toskala out on his poor play down the stretch, the Leafs of course having a poor record. Toskala became incensed, citing the injury that he had been playing with for some time even though he and the team had been faring poorly with his efforts.

Goaltending is a crucial position in the NHL, a position which has been consistently weak for the post-lockout Leafs. Obviously there is more wrong with the team than just one player between the pipes. Obviously Toskala, in the face of inconsistent back-up performances, has been trying to help the Leafs by staying in while wounded.

So when does being a good soldier turn into being a bad teammate? When does the altruism of playing through adversity for one's team begin to reek of self-importance? Are Leaf fans supposed to sympathize with Toskala for losing games when he's not at his best? Or should they wonder about what might have been if Toskala was up-front about problems that the team could address.

Maybe it's time for Vesa to understand that the team needs him to be honest with his abilities. Maybe it's time for the Leafs to realize that a goalie that can't last 20 games without getting injured probably shouldn't be counted on as an NHL goaltender, and that they might have a player that cares more about ice time than wins.
Posted by Scott Baker at 6:59 PM 3 comments:

Generally speaking, late November is around the time of the season that moves involving roster players tend to start. A quarter of the way into the season, GMs can feel like they've seen enough of their club to know what's going right or wrong, while still having enough time to turn things around.

Last year the first major player movement of the season for the Leafs came on November 24th, after their 20th game of the season, when Fletcher traded Steen and Colaiacovo for Lee Stempniak. Struggling to find offense in their first half of October, the Leafs had only 7 wins heading into late November, while the Blues were dealing with injuries to key players and badly needed depth.

(Funnily enough, last year's Blues team is an example for why Leafs fans can still have hope about their season, a team with some emerging youngsters, and one that needed time to gel before tearing up the NHL in the second half en route to a playoff spot.)

Game #20 once again approaches, and the Leafs are about to embark on a stretch of games against teams that they should be able to win against (no offense meant to any team that isn't Ottawa). Whether they know it or not, these next two weeks will likely decide roster spots for our forwards, and like last year both the players and fans may be surprised as to who gets the axe.

Whether it's through trades or waivers, it's obvious that our current roster is suffering from an abundance of contracts. We need the flexibility to make call-ups, if only for the energy that youthful players can bring during their cup of coffee to the show. Like last year, I'd be surprised if any players brought in or up amount to more than depth, but I think player movement is just as important right now.

So who needs to watch out for their jobs? Stajan and Hagman have both found themselves into the doghouse this year, and Exelby and Finger have been unable to cement their roster spot in the eyes of Wilson. Whatever happens, I can't imagine this roster looking the same a month from now.
Posted by Scott Baker at 1:51 PM 1 comment:

Season getting you down?

This season the Leafs have scored 13 goals in 6 games, without a win.

Last season the Leafs opened the season with 11 goals in 6 games, winning only one game.

Goal scoring wasn't a problem for us last year, even though things have looked rough there's still no evidence to say it will be this year. The season is young, there's lots of adjustments still to be made.

Six games does not make a lottery team.
Posted by Scott Baker at 9:42 PM 2 comments:

Now, at the end of last night's game Joe Bowen was saying that you'd really like to point to one positive thing you did after a night like this, but the Leafs couldn't. I disagree. Here's 10 positives that Leafs fans can take out of last night's loss:

2. The Leafs played about a period and a half that looked really great, except for an insanely soft goal. That's like, almost half a game. If you combined that with the minutes we played well against Pittsburgh and Washington, that's like a win and a third.

3. The Monster's fragile Swedish psyche has yet to be subjected to the worst this team can do in front of him.

4. Because Viktor Stalberg has been out cold these past couple of games we can't call him out for being a bust yet.

5. We've boosted the self-esteem of hockey fans across two nations, and made the fantasy owners of anyone who didn't draft Leafs very happy.

6. Beauchemin and Komisarek have many years ahead to make this up to us.

7. The organization is committed to the proper development of it's youngsters. By the keeping older, higher paid, worse players up on the team while they toil in the AHL.

8. Since neither Orr nor Wallin were signed to score goals, we're 2 for 2 on free agent forwards meeting expectations.

9. The Leafs are getting lots and lots of practice at losing. At least they'll be best in the league at something.

10. The Leafs are saving journalists across Canada from the mental breakdowns that would occur when attempting to write a positive Leafs article.

Never would have thought it still this early into the season (and with the general laziness and apathy that the papers give their sports sections), but there's a lot of food for thought in the papers today:

Gustavsson starts tonight. Apparently for just a period, his time will increase over the next three games. He'll have to face the awesome power of former Leafs Kris Newbury and Brad May though. Hope he's up to the challenge.

Some players still have some respect for history and tradition. Nice to see Cujo getting the respect he deserves from a new guy. I like Joey, but I really hope we don't have to rely on him as a starter for any stretch this season.

Kadri's not staying with the club, which is really for the best. Looking forward to next year's camp already.

On that last note, has anybody noticed that Cox has been surprisingly tame of late? I mean, there was only one real shot at Leaf fans in that article. Some of his articles about the Leafs have even been downright... optimistic. Creepy. Maybe that new picture of him looking old has mellowed him out.

Final cuts are coming this weekend, and it's been a great preseason for the club so far. Oct 1st can't come soon enough.
Posted by Scott Baker at 2:39 AM No comments:

Guess who's got the best NHL10 cover? 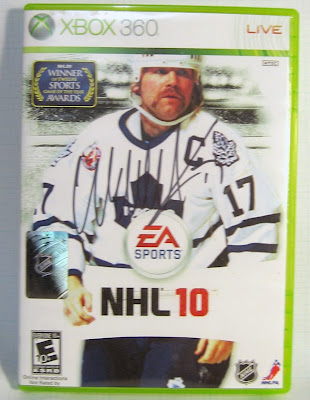 Now, I'm not trying to pick on anybody here. I base a lot of my analysis on the team based on what they've done, that's how I compare guys across our team and I'm wary about predicting too much into the future.

There are some Leafs out there who are, for some reason, maligned. Take the late Anton Stralman, who was lambasted for his play despite being on pace to tie White's points totals, had the second best Corsi rating on the Leafs, and had a better GAON/60 than White, Kaberle, Kubina, Schenn, and Finger. He also had a better Giveaway/Takeaway ratio than most of our top 6, and as an RFA would have likely cost us less than $1M to retain. Still, junk in the eyes of Leaf Nation.

Let's take this MLHS article (which makes an overall good point). Grabovski had "success" with a 48 point season in 78 games, supposedly justifying his raise to almost $3M in salary. Lee Stempniak, however, had an "underwhelming" 44 points in 75 games. That's a 4 point differential, for a guy who's making $400K less than Grabs and is only a year older.

(it should be noted that if you adjust Stempniak's time with the Blues out and work his numbers with the Leafs up to 78 games, he ends up with around 40 points)

The funny thing is, the players are almost identical. They're absurdly close in shots taken, TOI/G, Shifts/G, PPTOI/G. Defensively speaking Stemps has more blocked shots and an absurdly better Giveaway/Takeaway ratio, as well as double the hits.

Stempniak also came on in the latter half of the season, much like Grabs. While not as immediately impressive, he managed 18 points in his last 30 games with the Leafs, better than his first 13 points in the previous 30. After the trade deadline he got even better, with a 4 game point streak in March and 5 points in 5 games to close out April.

The difference? Shooting percentage. Stempniak's 0.086% is half that of Grabs' 0.167%, and it truly makes the difference, as if you adjust each player's totals to the others' Stempniak ends up with 19 goals and Grabs ends up with 14. There's your 4-8 points right there. And it's not as if Stempniak isn't capable of scoring at that pace either, he was shooting at 0.163% in his 27-goal sophomore season.

There have also been eyebrows raised at Burke naming Matt Stajan a top 6 player alongside Grabovski. But why not? Matt outscored Grabs in the same amount of 5on5 and PP TOI. He can also be counted on for some defensive play, with more PK time, more hits, blocked shots, and a much better (and positive) giveaway/takeaway ratio. I hate to say it, but if we're basing expectations based on last season Stajan deserves the top centre job more than Grabs.

Stajan's also only two months older than Grabovski. Are we hating on Stajan because he's a known quantity to us? Did we actually buy into the hype that the guy was just more trash from the JFJ era despite what was going on in the games in front of us?

Look, I'm not making predictions for next season, nor am I saying that Grabovski isn't a good and exciting hockey player. I just think it's funny how opposing the viewpoints are on three players that are actually very similar in their contributions to the team we had last year.
Posted by Scott Baker at 1:10 AM 3 comments:

Better Writers Than Me